A little taste of big things to come at the new Goodbar with the first of many international announcements coming your way from our weekly house and techno party Nights Like This!

Santé is red hot at the moment and we cannot wait to hear him rinsing it out on our Void Acoustics sound-system downstairs in the club.

Tickets are limited and on sale from 5pm Thursday 7th July via www.divisionagency.com.au 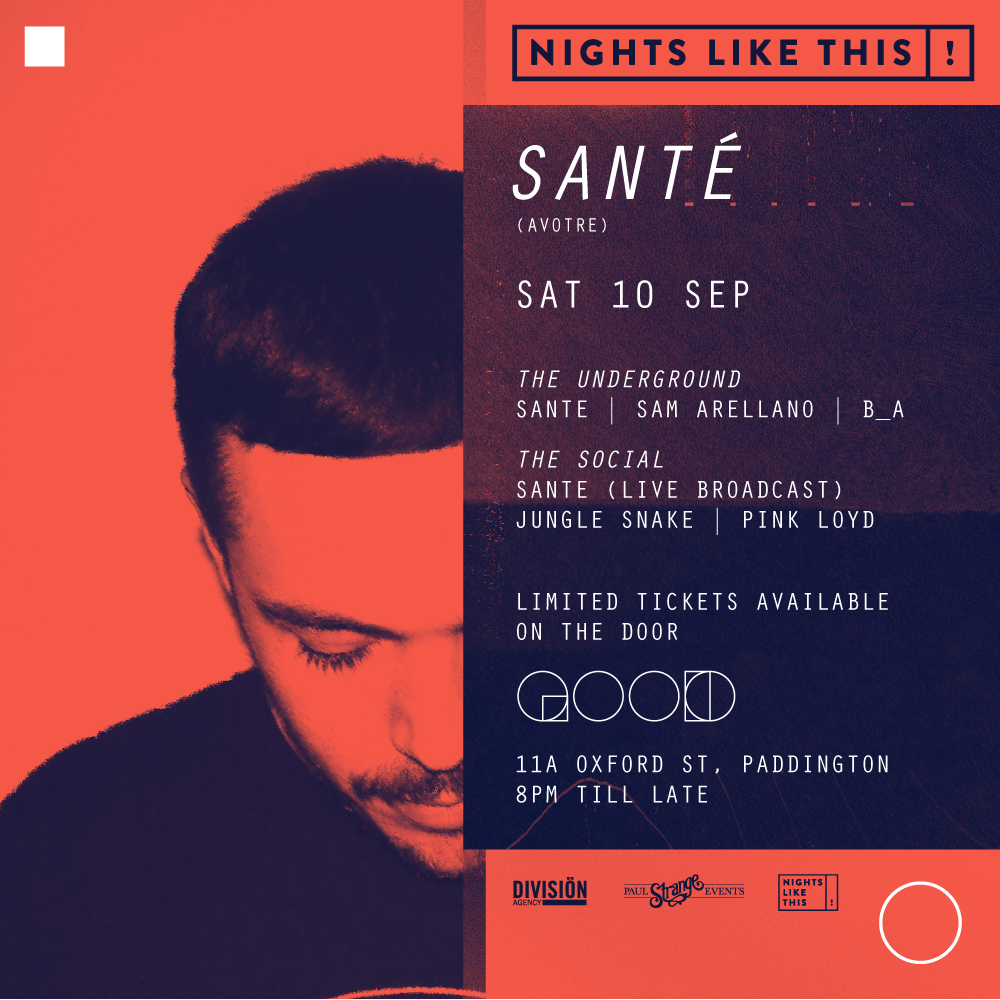 Santé, hailing from Berlin, is part of a new school of artists championing musicality, skilfulness and creativity over mindless loops and endless repetition. His productions, like those on his record label AVOTRE, ooze character, charisma & humour, feelings so often overlooked in the realms of house music.

After teaching himself to play the guitar in his early teens, Santé bought an Akai MPC-2000 when he was 16 and set the ball rolling for a life entrenched in electronic music. “I was totally into sampling and house”, he recalls of those early days of button bashing and experimentation. He left his hometown when he was 21 to immerse himself in the dance music mecca that is Berlin. A studio internship blossomed into a full-time career, with the emerging talent spending six years producing jingles and ad music and nurturing his passion for house music at any opportunity. Nothing was released, however, until one of his demos found its way to Matt ‘Radio Slave’ Edwards. His first ever release came out on Edwards’ acclaimed REKIDS imprint, setting the bar incredibly high and garnering him a lot of high-profile attention in the process.

The next major stepping-stone for him was meeting Tiefschwarz. “They were looking for a new engineer and hired me to oversee all projects for their label Souvenir, where I got the freedom to release my music and a platform to experiment” he explains. This fruitful, intense relationship lasted three years, a time Santé describes as being “a fantastic experience”. After working on many of Tiefschwarz’s releases, including remixes for Richie Hawtin and Grace Jones, Santé decided to fly the nest in search of new pastures. His subsequent release schedule spells out what a diverse producer he is and how far his popularity ranges – from bastions of techno like Cocoon to the kings of big room house Defected, through to underground darlings like Desolat and Supernature, all the way to acclaimed remixes for huge stars like Depeche Mode. Few producers can claim such a breadth of imprints to be associated with at any one time. When you ask Santé to describe his musical style, he says he doesn’t really know how to – which goes someway to explaining his widespread appeal.

In 2012, AVOTRE was born. The brand has grown incredibly quickly, to the point where it is now an established label doing showcases around the world, consistently releasing top 10 hits and underground club tunes. Santé’s residency at Sankeys in Ibiza has also been an unadulterated success, his style proving to be a big hit on the island – with the warmth of his brand of house music now bolstered by a loose techno rhythm and percussive drive, Santé and Ibiza were always going to get along.

Plans for the future include his long-awaited debut artist album, which he promises will be more of a song-based affair than a straight-up collection of dancefloor grooves (“to show a few more skills”), and further developing his AVOTRE brand, to include a clothing line which will go hand in hand with the releases. With an album tour to look forward to, which will take him to all four corners of the world, the upward momentum that has characterised Santé’s career so far shows no sign of slowing down.